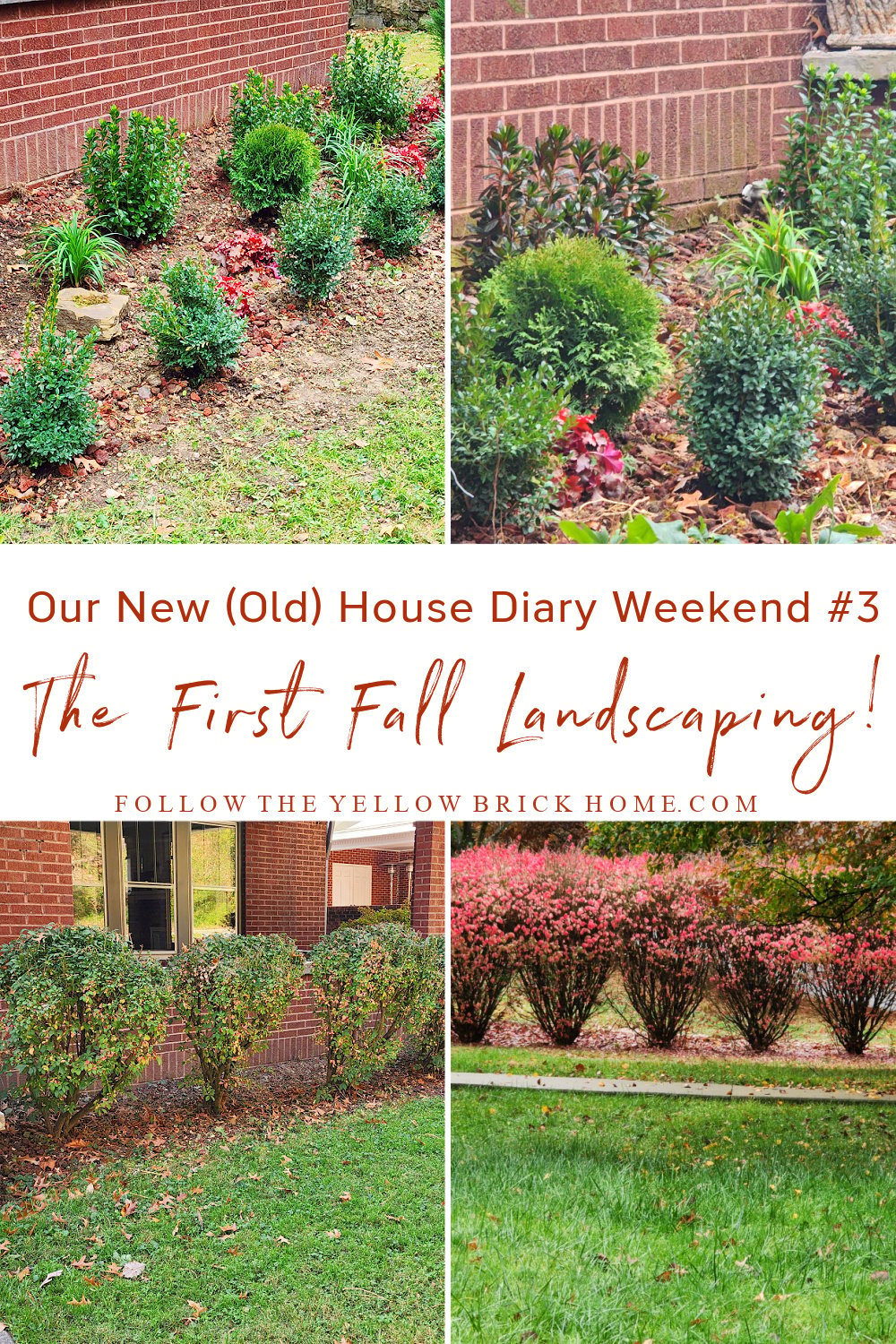 Hello friends! We have officially owned the house for three weeks and we have made so much progress already! I decided to start a weekend diary to keep you up to speed as we go along (I will go back and add a post about last weekend’s progress in the next day or two.)

While my husband and friends are doing some dirty work inside, I am staying outside doing what I can. This weekend I (with a little help from my husband and brother) completely re-did the foundation landscaping in front of the porch. If you are totally shocked and confused, you might want to check out THIS POST from last week where I broke the big news about buying a new 1926 home! 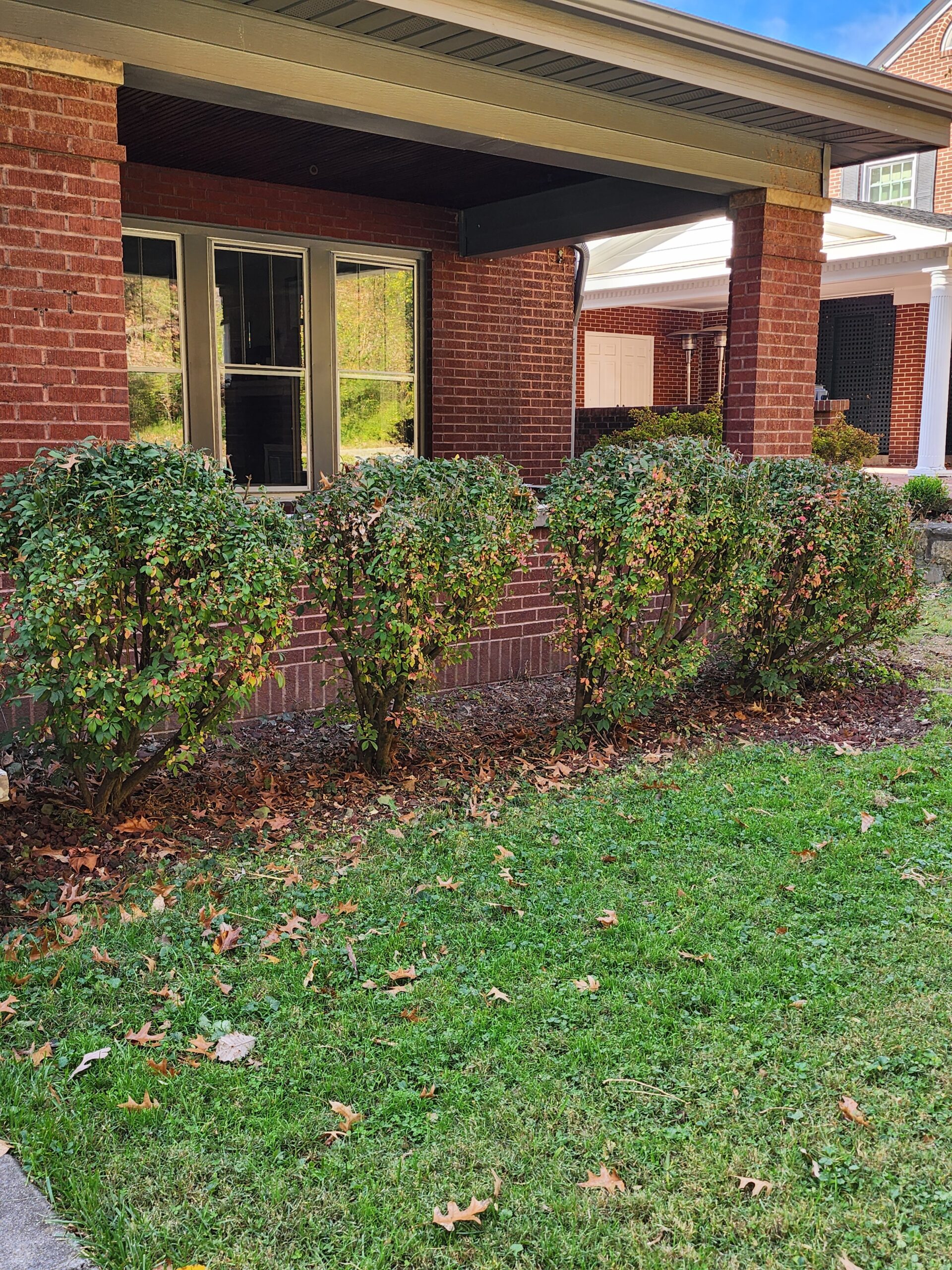 When we purchased the home, the only landscaping out front was a row of very old burning bushes on each side of the sidewalk. I love burning bushes, but these did not “burn” in this spot because it is shady and they need more sun to turn their characteristic vibrant red. Additionally, I am not a fan of deciduous bushes as primary foundation landscaping and really prefer evergreens.  I knew right away I wanted to rip them out but digging them was way too hard of a job for me. My brother tried to dig them out but he ended having to put a chain around them and pulled them out with his truck. 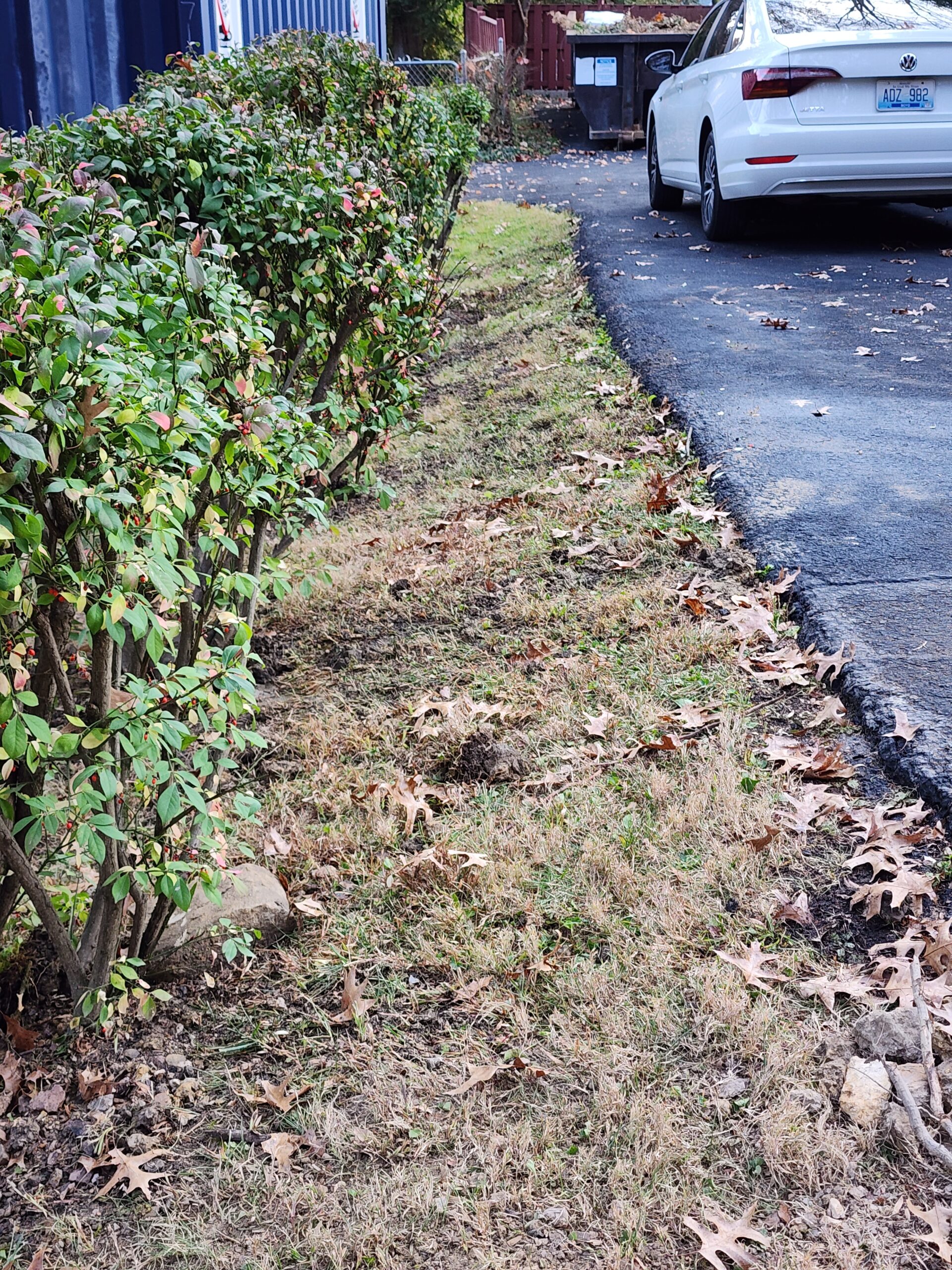 At first I had no plans of keeping the bushes, but then I had that “Eureka!” moment and realized they would line the driveway perfectly, provided three season privacy and winter structure between us and the (very nice!) new neighbors. The neighbors are avid gardeners with a lovely yard, and they loved the idea of having a row of burning bushes to enjoy from their side too. 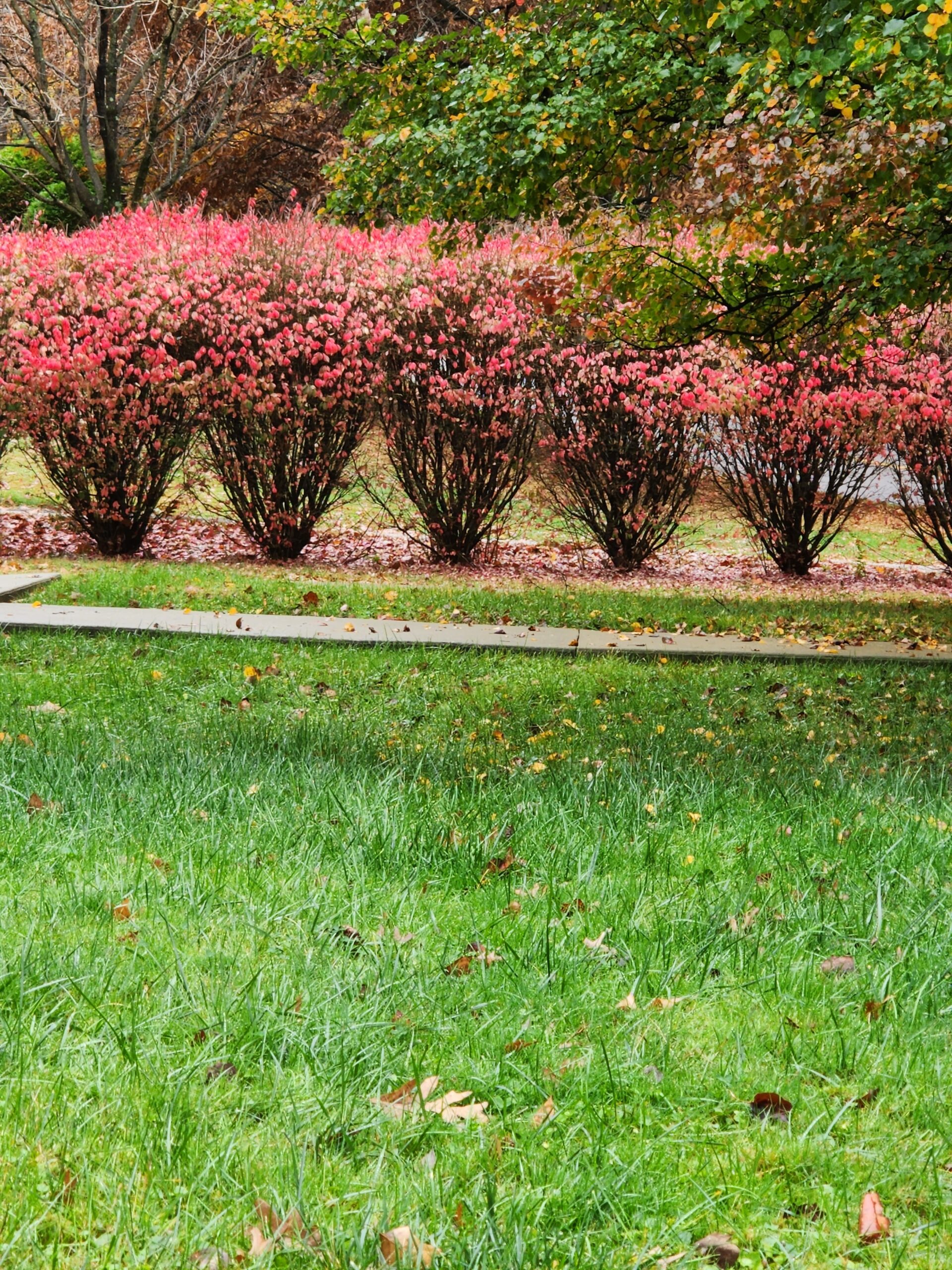 Here is a photo from another home in our neighborhood showing what we hope the bushes will look like next October! They will get more sunlight in their new home, so they should turn red. We are all keeping our fingers crossed that they will survive the transplant. So far, so good! 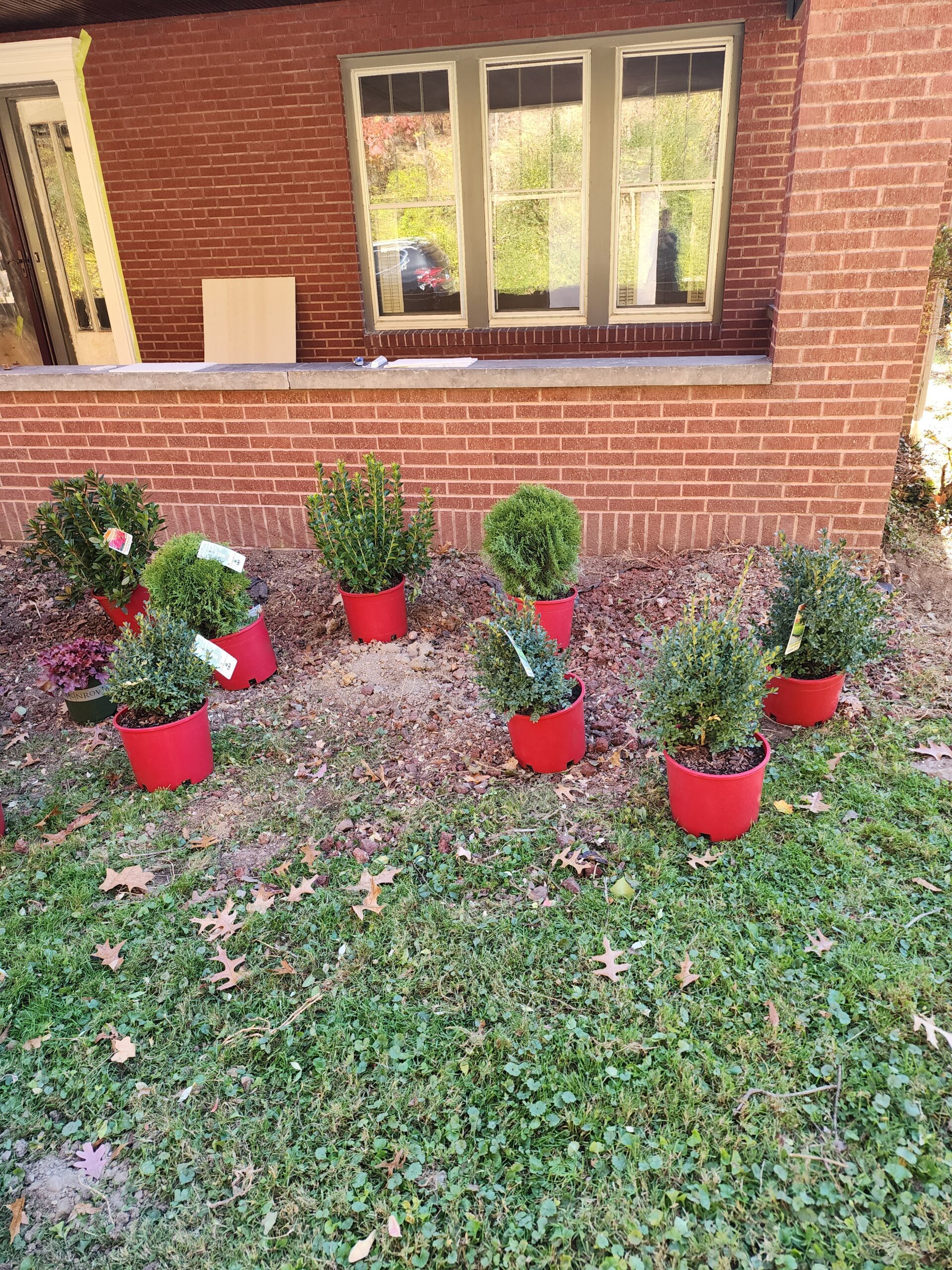 Okay you guys…I had no intention of filling the bare spots in front of the house until spring. We decided there was just too much going on and that landscape plants weren’t in our immediate renovation budget this fall. Nevertheless, I went to Lowes just to see if there were any evergreens marked down that were too good to pass up. Boy did I score!!!!!!!!!!! I already knew I wanted boxwoods and azaleas for the front of the house, (partial-shade) but the new ones just off the truck at Lowes weren’t on sale. I decided to ask the manager if they would be on sale anytime soon and told him about renovating the new house and landscape, and he ended up letting me have whatever I wanted for 75% off!!!!!!! 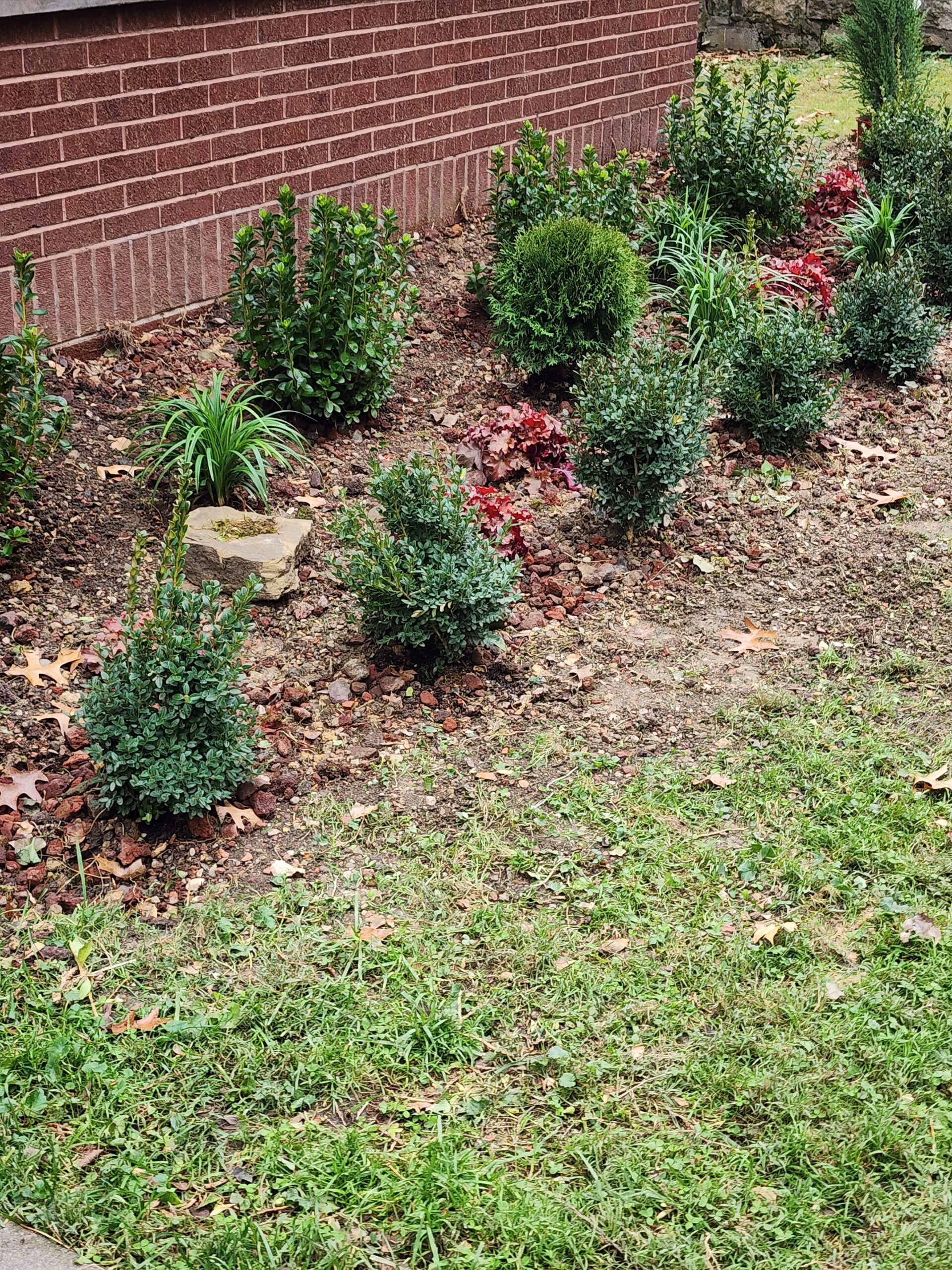 I picked out 32 plants: azaleas, boxwoods, junipers, and globe arborvitae, liriope grasses and red heuchera (coral bells).  The regular price total would have been $1,095.  I got them all for $270.00! How could I pass that up? SCORE!!!!!!!! With the help of our auger my husband was able to take a break from ripping out kitchen floor and drill some planting holes relateively quickly and I got everything planted.  It will take a couple of years but my goal is to have a beautiful two or three level hedge of azaleas with boxwood in the front and another lower level of thick English ivy. For now I am filling in gaps in the bed with liriope and heuchera. We will wait until spring to freshen up the gravel/mulch. 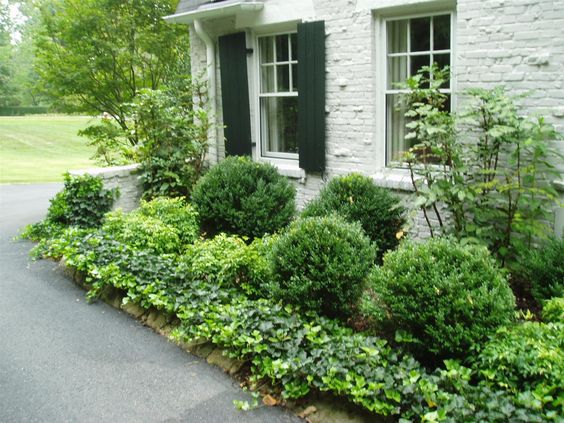 Later this week I will add English ivy to the front of the bed. Even after my husband spent the whole first weekend removing almost 100 years of ivy from the brick, there’s still plenty of ivy around the yard to take some cuttings. 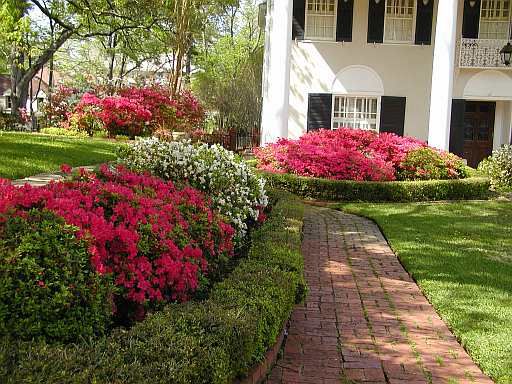 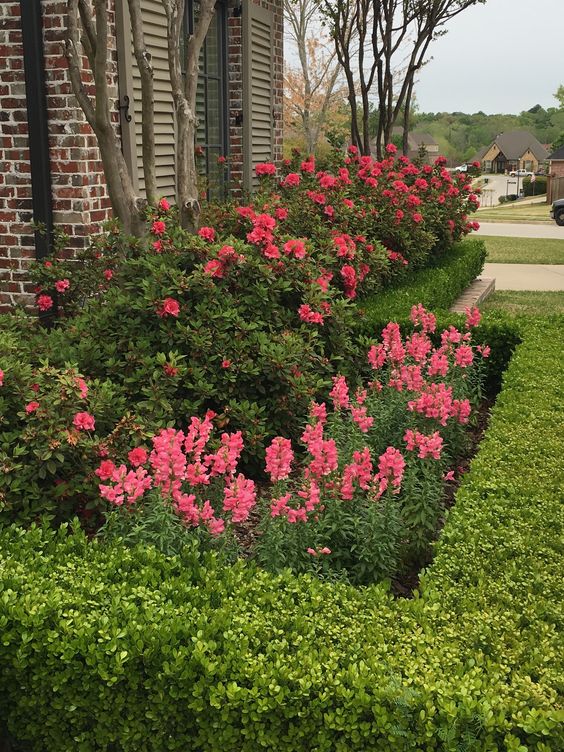 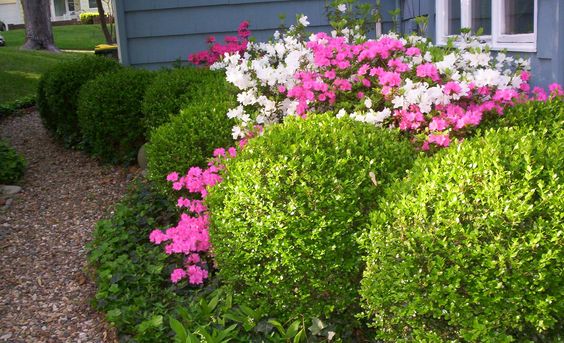 Later this week I will add English ivy to the front of the bed. Even after my husband spent the whole first weekend removing almost 100 years of ivy from the brick, there’s still plenty of ivy around the yard to take some cuttings. I hope with time to have a beautiful low ivy hedge like the picture above. 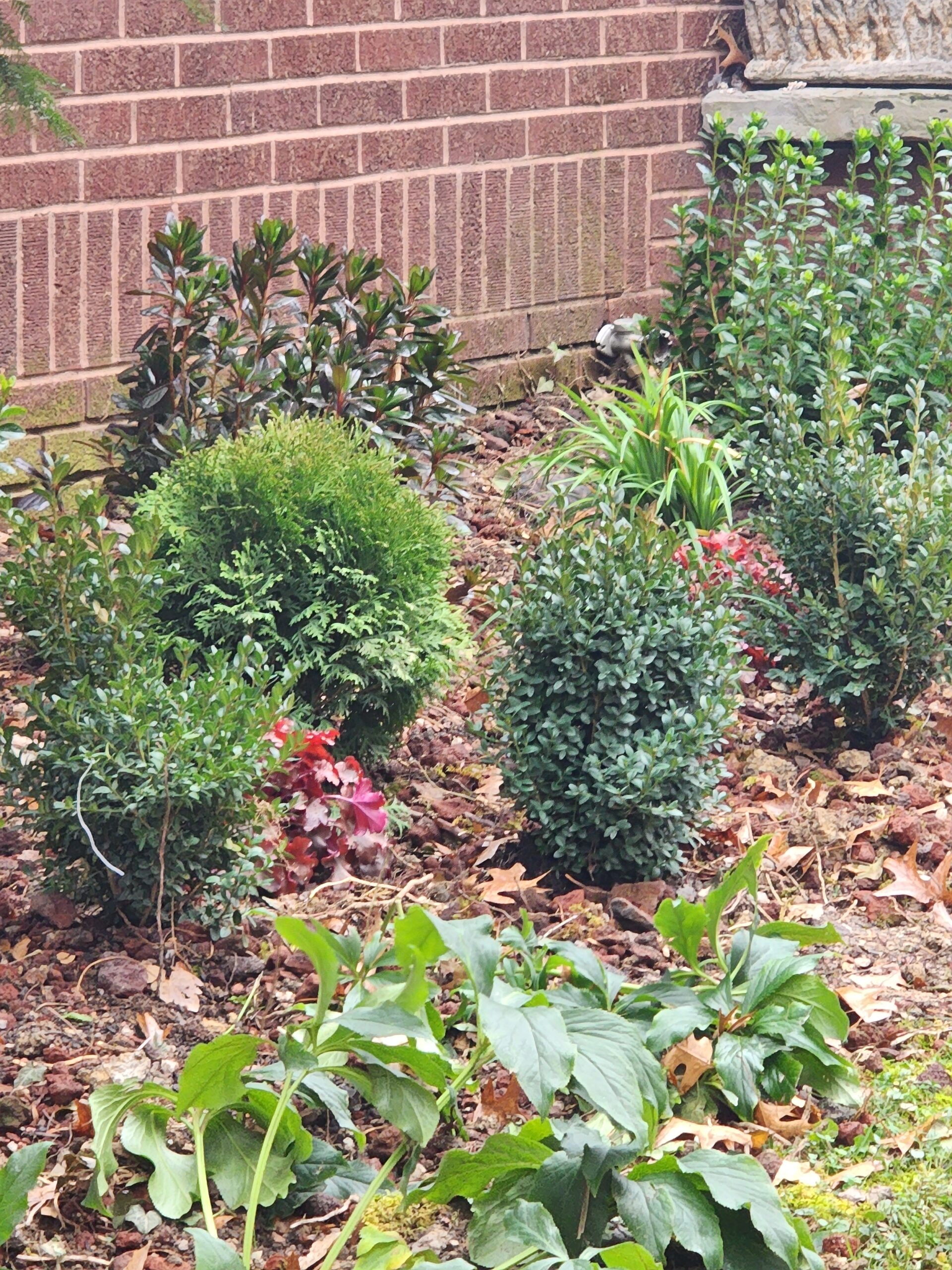 The timing of the new planting and transplanting the burning bushes was perfect this weekend. It was mild during the day and didn’t frost the night after everything was planted. The day after planting, it lightly rained all day which was perfect! I am so optimistic that everything will take off! Here you can also see two old hellebores I inherited with the house. I plan to move them to a new spot later this week. 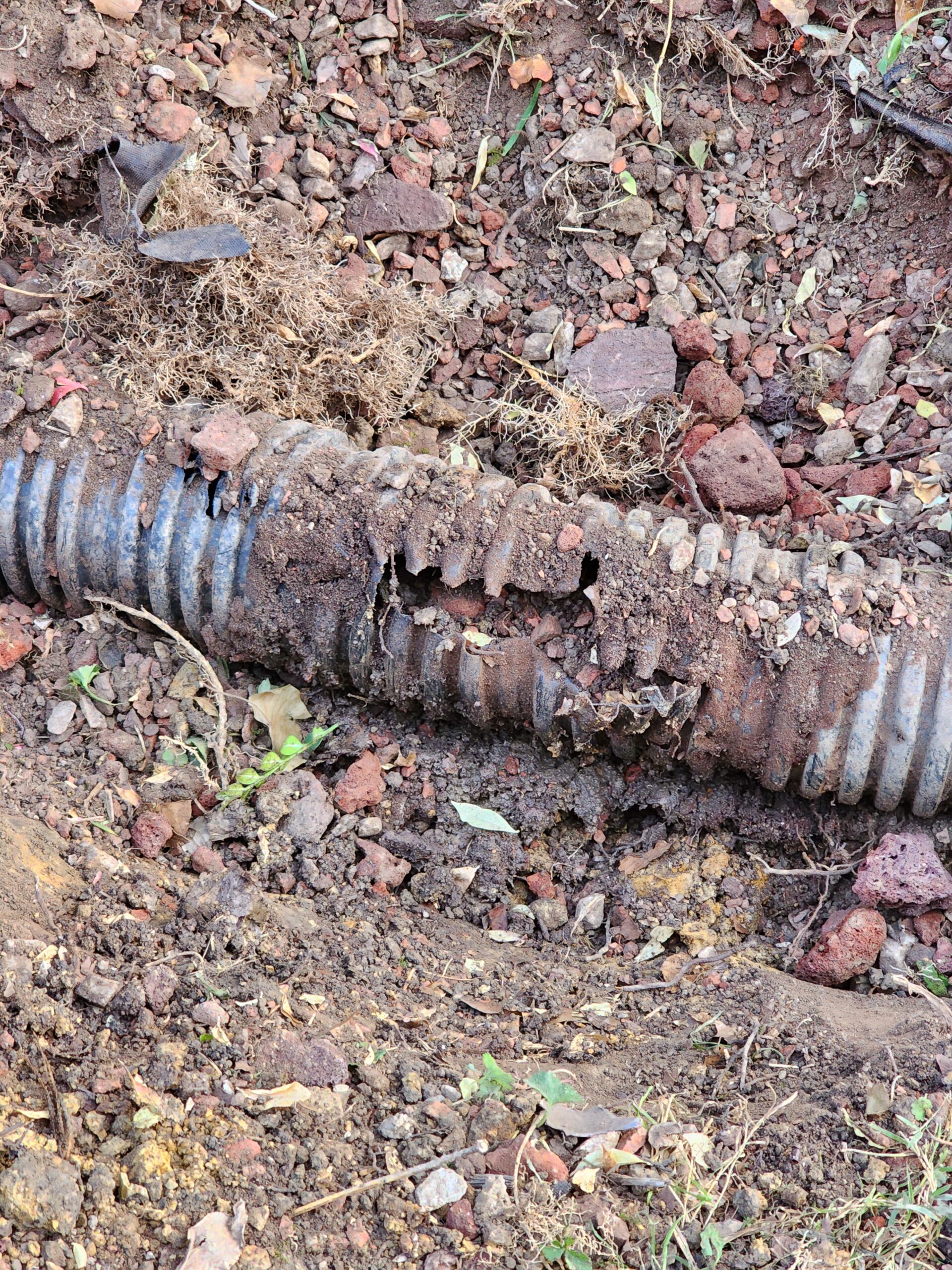 Well, if you have ever done any kind of renovations or garden project you know it’s not always smooth sailing! When I said my husband was able to quickly dig the holes with the auger, we did have a bit of a set back. Everything was fine until he ran the auger into a drain pipe! I was so worried we had really created a major catasptrophe, but after checking everthing out we are pretty sure it was just an old non-working French drain. We still had to stop everything we were doing and run to Lowe’s to get a new pipe to replace the broken part, just to be on the safe side.  The damage was promplty repaired and the plants are all in place now and seem to be happily adjusting to their new home.

That’s about all for now! What do you think about the new landscaping and the burning bushes? Would you have gone off  your home and garden reno budget for an amazing deal? I love hearing from you!

Thanks for visiting today!
Amber 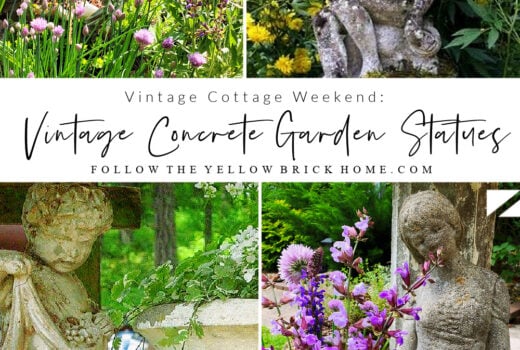 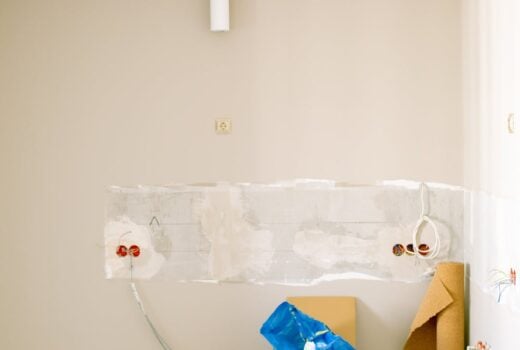 How to the Stress Out of Rennovating Your Home

Which Home Improvements Take Priority When You’re Trying To Sell? 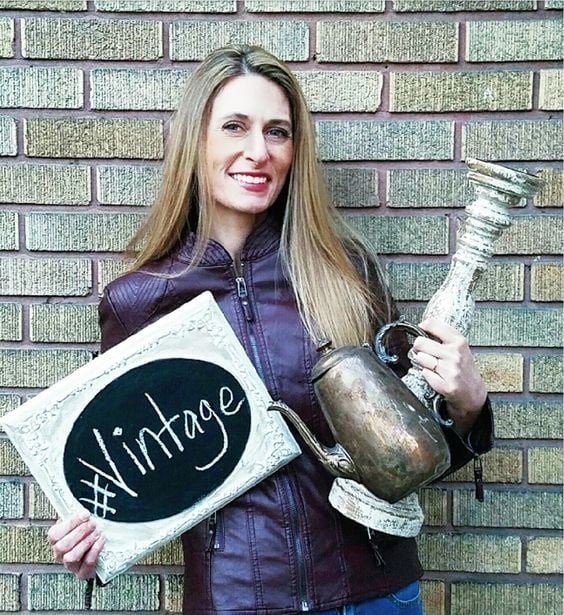 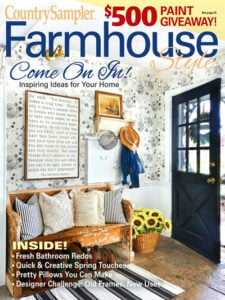 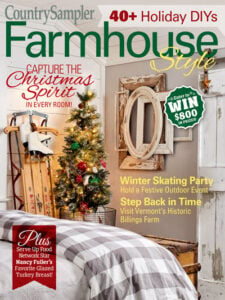 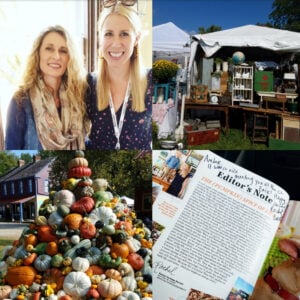